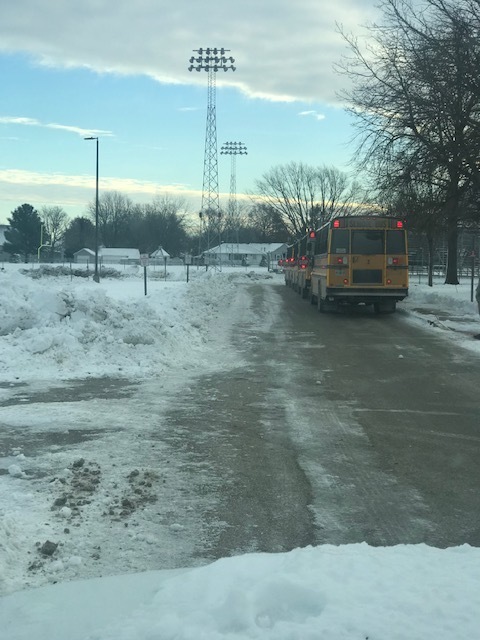 This has been a crazy winter. Up until yesterday (February 13, 2019), the district has not implemented alternative weather related bus routes since consolidation. The district office and the transportation office have created a document that details how each bus will operate on days when there are weather conditions that limit travel in certain portions of the district. If the district elects to use an emergency route - information will be sent out as soon as possible via the Abingdon-Avon 276 Smartphone App. If you do not have the app on your phone, we highly recommend downloading it.  Additionally, all app information from the district is pushed out to the district webpage/Live Feed (www.atown276.net) and the district Facebook page (Abingdon-Avon CUSD #276). Automated calls will be sent out on mornings when any weather decisions are made.

Emergency Snow Routes may be implemented for snow, ice, flooding or other emergencies. These routes could be implemented district-wide or for specific routes. It is important that parents and students know their bus number and their driver's name. The morning of an announced "Emergency Bus Route Day," parents may call the bus barn up until 6:45 am for assistance.

As with any weather-related announcement, sending or not sending your student is a decision left to each parent. If a parent cannot travel their road to meet the bus, please call the proper school office after 7:45 am to excuse a student due to weather-related travel concerns.

Thank you for your patience and flexibility through this very trying winter season. The transportation director and superintendent are out every morning trying to make the best decisions that take into consideration both student and staff safety.

Below you will find each Emergency Route:

District 276 will run emergency snow routes when necessary as described below, even though other roads may be partially open. If able to navigate their roads, parents may bring their children to an intersection along these routes for picked up. Afternoon drop-off routes will be run as they were in the morning unless another notice is sent out.

Abingdon town routes will be run as usual.

Buses will leave their respective bus barn between 6:30 and 6:45 with intent of being back in   Abingdon by 7:15 or Avon by 7:40. Times may vary depending on road conditions.

Route 2 – Rudy Honeyman:  North on Rt. 41 to Bracken corners and west on Co 26 to the county line road; turn around and return to Abingdon, picking up students along Co 26 and Rt. 41 who normally ride this bus.